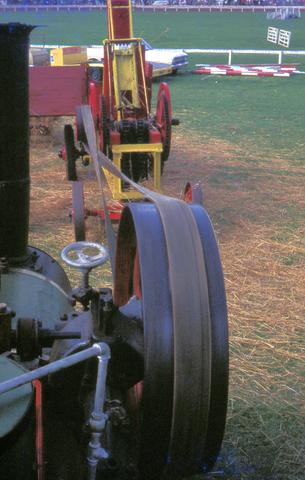 Hal Wyatt, born Hobart (1923-2004), a taxation officer, steam buff, restorer of historic machinery, sailor, and amateur photographer, took several thousand photographs in Tasmania over more than six decades. As a child, Hal Wyatt lived in several locations across Tasmania including Queenstown, Wynyard and Deloraine, following the postings of his father John Burgess Wyatt (1902-1975), who worked with the Postmaster General’s Department. Hal's mother was born into the Hale family, a line of watermen or boatmen, who worked on the Derwent River in the 19th and early 20th century. Hal’s paternal grandfather, Benjamin Wyatt, had been a photographer and publisher of scenic postcards in England, at Kingsbridge in the South Hams district of Devonshire. Hal Wyatt was educated at St Hilda’s School, Deloraine and Launceston State High School, where he completed his leaving examination and public service examination in 1941. He began work with the Australian Taxation Office in Hobart, then in the latter part of World War II enlisted with the Royal Australian Navy, joining the crew of the HMAS Junee, an Australian-built Bathurst class corvette, commissioned in 1944, completing missions off New Guinea. After the war, Hal returned to work for the ATO in Hobart, settling with his wife Joyce (nee Hope) at Howrah on the eastern shore of the Derwent River, where they raised three children, David, Marian and Kerin. In his spare time, he restored engines, ships and yachts and built a caravan for family holidays around Tasmania, many of which coincided with trips to look at steam trains and search for derelict engines and machinery. He was involved in the Ship Lovers’ Society of Tasmania, which was the precursor of the Maritime Museum of Tasmania, as well as the Tasmanian Transport Museum at Glenorchy.

Colour photograph shows how a belt is connected to drive wheel of a steam engine and a baler, at a demonstration held near central arena at Elphin Showground, Launceston, also set up for sheepdog trials

Available for private research and study.