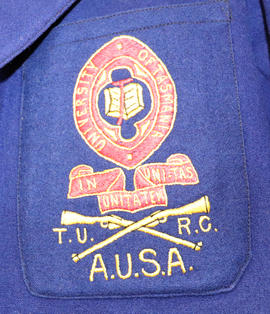 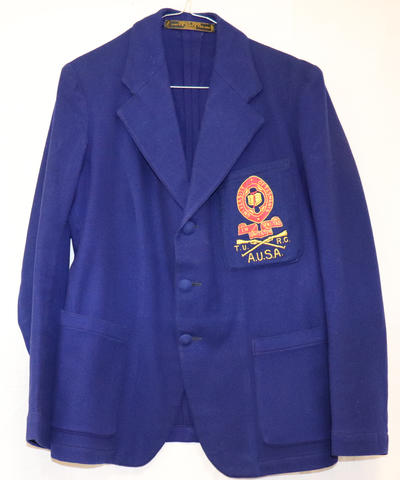 Donald George Rockcliff of Sassafras (d. 1981). He matriculated from Devonport State High School in 1926 and gained his B.Sc. in 1932 and B.E. in 1933. He was a member of the T.U. Rifle Club, shooting the fourth highest score in the Inter-Varsity match in 1932, for which he was awarded a full blue. He was also a member of the Combined Universities Rifle Team against Victoria in March 1932 and was thus one of the first entitled to wear ‘A.U.S.A.’ on his blazer badge. In 1934 he broke a record in the I.V. match in Hobart which Tasmania University Rifle Club won. For photographs of the T.U.R.C. teams see UT 367/1-7

T.U. Rifle Club blue badge (T.U.R.C. under crossed rifles) and A.U.S.A (Australian Universities Sport Association).
Blazer was made by Smale Bros. Tailors, Hobart, unlined, with cloth buttons.
It is not known when the Union first adopted a sports blazer and the colours Oxford blue, rose and primrose (1949 TUU Handbook
describes blazers as navy blue with crimson and gold braid and Uni arms on pocket), but University teams were first sent to Inter Varsity sports in the 1920’s and the Student Representative Council was formed in 1926. In 1931 it was reported to the S.R.C. that the
Y.M.C.A. was adopting a blazer similar to the University blazer and the Secretary was instructed to see the Secretary of the Y.M.C.A. (Togatus Sept. 1931). The badge used before 1937 was adapted from the University Common Seal (originally the seal of the Tasmanian Council of Education). In 1932 100 small metal badges were also ordered by the Union from a Melbourne firm. The ‘blue’ award was shown by a badge of the sporting club worn below the pocket badge and in this example worn on a distinctive plain blue blazer. Members of combined universities teams could also gain a ‘blue’ from the Australian Universities Sports Association, but in 1932 it was decided that a separate ‘blue’ would detract from the individual universities’ blues and instead members of combined teams could wear the A.U.S.A. badge below their own badges on their own university blazer or university blue blazer pocket. Donald Rockcliff was one of the first to gain this distinction

Original inventory and descriptive notes can be found at: https://eprints.utas.edu.au/18329/1/UT366.pdf