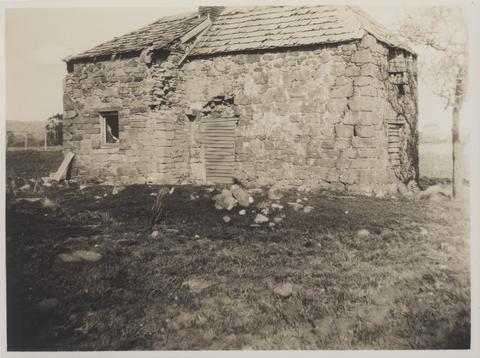 Milton: the residence of J. Allen

Dr G.Musgrave Parker (1885-1965) qualified in medicine (M.B. B.Ch.) at Cambridge, U.K., in 1913, and in 1914 he was appointed a medical officer of health in Swansea. From 1915 until 1918 he served with the Australian forces in Egypt and France. On return he served as medical officer for the Kentish Municipality (Sheffield, Rai1ton) 1919-1921; Swansea 1921-1926 and Clarence, 1926-1947, and then joined the staff of the Repatriation Hospital, Hobart, until he retired in 1955. He acted as president of branches of the RSL at Kentish, Swansea and Lindisfarne. He devoted most of his spare time, however, to a study of the history of the East Coast and hoped to write a book on it, but this was never finished.

Photograph, thought to have been taken in the 1930's, of the rear of the rebuilt Milton Farm house. In 1826, young John Allen applied for and received a grant of land on Tasmania's east coast: four hundred acres on the west bank of Cygnet River. He named the property Milton, after his home village in England. In February 1828, he reaped his first harvest, but in that same month, an Aboriginal raiding party attacked the (undefended) property, after previously harassing Allen's neighbours John Lyne and George Meredith. Allen's house was robbed and torched and his wheat stack burnt; damage was estimated at £300. Subsequently awarded a two hundred acre extension to his land grant 'as a remuneration for the Aforesaid Loss', he set to work rebuilding, this time a two-storey house of stone