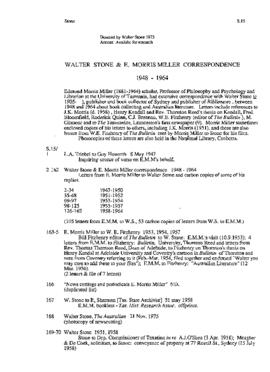 Walter William Stone (24 June 1910 – 29 August 1981), known as Wal Stone, was a noted Australian book publisher, book collector and passionate supporter of Australian literature. Walter was born in Orange, New South Wales. He spent the first 14 years of his life in Orange, before moving to Auburn, a western Sydney suburb, where his father wound down his career as a bookmaker. After completing his education at the Parramatta Boys High School, he was articled to a solicitor, but after the solicitor's death he held a number of depression-era jobs such as rent collector and door-to-door salesman. Partial deafness kept him out of the military during the Second World War. He worked as a clerk for General Electric and continued that occupation with another company after the war until 1956. Acting on his interest in book production, he bought an Adano press in 1951. During the next decade, as Talkarra Press (an Aboriginal word for "stone"), he produced ten innovative limited editions. A bibliophile from an early age, was a founding member of the Book Collectors Society of Australia (BCSA) in 1944, and was its major supporter for all his life. He edited and printed the journal of the society, Biblionews, from 1947 until his death in 1981. For more information see : https://en.wikipedia.org/wiki/Walter_W._Stone

Edmund Morris Miller (1881-1964) C.B.E., M.A., D.Litt. (Melb.) was a librarian in the Public Library of Victoria from 1900 until 1913 when he was appointed Lecturer in Mental and Moral Science in the University of Tasmania. He was made Assoc. Prof. in 1925 and Professor in 1928. From 1933 to 1945 he served as Vice-Chancellor and also was Honorary Librarian from 1919 until 1945.
For more information see http://www.utas.edu.au/library/exhibitions/morris_miller/index.html
and http://adb.anu.edu.au/biography/miller-edmund-morris-7581

Collection of correspondence between Walter Stone & E. Morris Miller regarding correspondence with Walter Stone (c1905- ), publisher and book collector of Sydney and publisher of 'Biblionews' , between 1948 and 1964 about book collecting and Australian literature. Letters include references to J.K. Morris (d. 1958) ,Henry Kendall and Rev. Thornton Reed's thesis on Kendall, Fred. Bloomfield, Roderick Quinn, C.J. Brennan, W.E. Fitzhenry (editor of The Bulletin ), M. Gilmour and to The Tasmanian, Launceston's first newspaper (9). Morris Miller sometimes enclosed copies of his letters to others, including J.K. Morris (1951), and there are also
letters from W.E. Fitzhenry of The Bulletin sent by Morris. Miller to Stone for his files. Photocopies of these letters are also held in the National Library, Canberra.