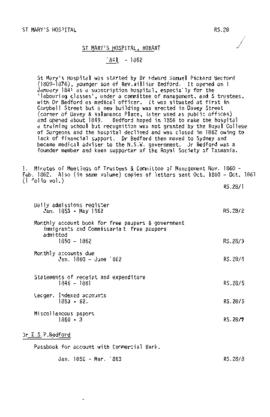 St Mary's Hospital was started by Dr Edward Samuel Pickard Bedford (1809-1876), younger son of Rev.William Bedford. It opened on 1 January 1841 as a subscription hospital, especially for the 'labouring classes', under a committee of management, and 5 trustees, with Dr Bedford as medical officer. It was situated at first in Campbell Street but a new building was erected in Davey Street (corner of Davey & Salamanca Place, later used as public offices) and opened about 1849. Bedford hoped in 1856 to make the hospital a training school but recognition was not granted by the Royal College of Surgeons and the hospital declined and was closed in 1862 owing to lack of financial support. Dr Bedford then moved to Sydney and
became medical adviser to the N.S.W. government. Dr Bedford was a founder member and keen supporter of the Royal Society of Tasmania.

Edward Samuel Pickard Bedford (1809-1876), surgeon, politician and public servant, was born in London, the younger son of William Bedford and Martha, née Pickett. He arrived at Hobart Town on 31 January 1823 with his parents. While his elder brother, William, was destined for the church, Edward was trained in medicine. He assisted in the Colonial Hospital and became subordinate assistant surgeon of the Medical Department in 1826 and assistant colonial surgeon in 1829. In 1831 he went to England where he studied medicine in London (M.R.C.S., 1833; F.R.C.S., 1854). He returned to Hobart in 1833 with the appointment of assistant colonial surgeon first class. He commenced private practice, became one of the most successful of Hobart's doctors and was medical officer for most of the life assurance companies. He was appointed medical officer for the city in 1852, a commissioner in lunacy in 1856 and a justice of the peace. His duties as surgeon to the Commissariat Department included attendance on the sick in the Colonial Hospital, various penitentiaries, the Orphan Schools, convict road-gangs and the constabulary. From 1841 he served on the Medical Examiners' Board and made the recruitment of doctors a special interest. Realizing that the sick poor of Hobart loathed the Colonial Hospital with its convict discipline and associations, he started St Mary's in Campbell Street as a subscription hospital; in 1847 the foundation stone was laid for the unpretentious, but charming, building in Davey Street, Hobart, which was used as public offices after St Mary's closed. By 1856 Bedford had planned in detail a medical training school at St Mary's with Thomas Arnold as its classical and mathematical lecturer and himself teaching surgery. The scheme was unsuccessful, for the Royal College of Surgeons refused its recognition, and Hobart was left with few scholars when prosperity declined after 1856. Some young men did, however, make their first steps in a medical career with Bedford before going to British universities, but none of them returned to Tasmania. He was prominent in the Royal Society and showed a diversity of interest in his three papers: 'Observations upon the condition of young marsupial animals' (1842); 'On the epidemics of 1852-3' (1854) and 'On the origin of nervous force' (1863).
From: http://adb.anu.edu.au/biography/bedford-edward-samuel-2962