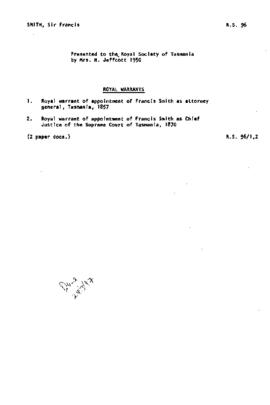 Sir Francis Villeneuve Smith , politician and chief justice, was born on 13 February 1819 at Lindfield, Sussex, England, son of Francis Smith, merchant, of London, and his wife Marie Josephine, née Villeneuve, of Santo Domingo, Dominican Republic, West Indies. He acknowledged his mother's descent from the French admiral Villeneuve by adopting that name in 1884. The Smiths came to Van Diemen's Land in 1826 and settled at Campania near Richmond. Francis returned to London and became a student at the Middle Temple in 1838 and at University College, University of London (B.A., 1840). Smith was appointed to the Supreme Court bench in 1860. He helped to found the Tasmanian Club next year and was its first president. He was knighted in 1862, and on 5 February 1870 became the first Australian to hold office as a chief justice after having been a premier. For more information see: http://adb.anu.edu.au/biography/smith-sir-francis-villeneuve-4603

Presented to The Royal Society of Tasmania by Mrs. H. Jeffcott 1950

Royal warrents of appointment of Francis Smith as attorney general and as Chief Justice of the Supreme Court of Tasmania.