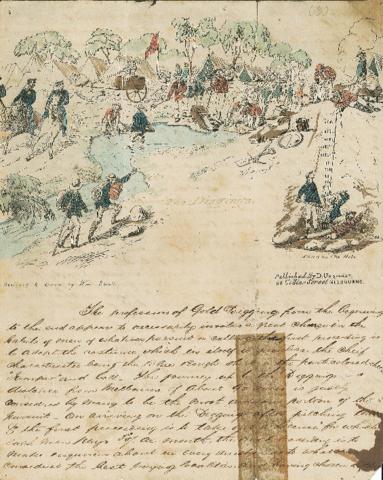 William Strutt (1825-1915) was born in Devon, England and studied art in Paris. He arrived in Melbourne on the HMS Culloden, in July 1850. Strutt published engravings in the first issue of the Illustrated Australian Magazine and designed, engraved or lithographed postage stamps, posters, maps, transparencies and seals and began to learn all he could about the history of the colony. His friend and patron John Pasco Fawkner encouraged him to record important colonial events. His works are represented in galleries in Sydney, Melbourne, Ballarat, Adelaide and Hobart. Among European collections, le Musée de Lucerne and the Peace Palace at The Hague hold important paintings. The Dixson and Mitchell libraries, Sydney, the National Library of Australia, State Library and the Parliamentary Library, Victoria, and the Alexander Turnbull Library, Wellington, all hold extensive collections of his sketches, paintings or manuscript material.

Presented to the Royal Society of Tasmania by George Elliot

Manuscript notes on gold digging, written around [c.1858] author unknown, may have been George Elliot. Includes on the front page a coloured drawing of 'The Diggings, designed and drawn by William Strutt, and published by D. Urquhart, Collins Street, Melbourne.