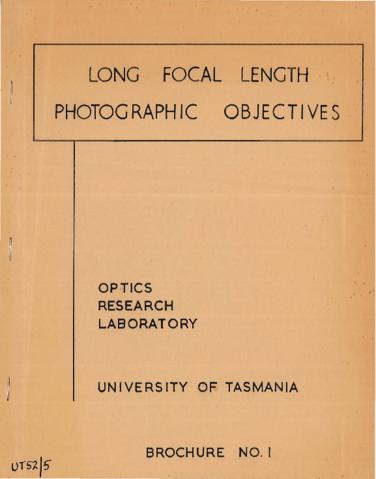 Professor A. L. McAulay (1895 - 1969), Professor of Physics 1927 - 1959 and formerly lecturer 1922 - 1926 and student assistant 1914 - 1916, was the son of Professor Alexander McAulay. He was educated at the Hutchins School, University of Tasmania (Bsc 1916), Cambridge University, (SA 1921, MA 1926), University of Manchester (PhD 1921) and the Cavendish Institute under Lord Rutherford. Under him the physics department grew into one of the most active in Australia. He undertook and directed research into a variety of topics, including particle physics, cosmic radiation and metal surface electrochemistry. His experiments were simple and aimed at the basic problems and his students learned to think carefully about the aims and underlying principles of their work. He was interested in biophysics. During the war he established an optics laboratory to supply prism and lenses for military equipment. for more information see : http://adb.anu.edu.au/biography/mcaulay-alexander-leicester-7782

Original inventory and descriptive notes can be found at : https://eprints.utas.edu.au/18303/1/UT52.pdf