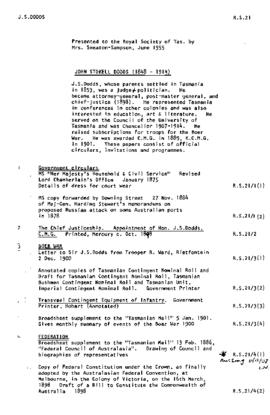 J.S. Dodds, whose parents settled in Tasmania in 1853, was a judge and politician. He became attorney-general, post-master general, and chief-justice (1898). He represented Tasmania in conferences in other colonies and was also interested in education, art & literature. He served on the Council of the University of Tasmania and was Chancellor 1907-1914. He raised subscriptions for troops for the Boer War. He was awarded C.M.G. in 1889, K.C.M.G. in 1901. For more information see: http://adb.anu.edu.au/biography/dodds-sir-john-stokell-3421

Presented to the Royal Society of Tasmania by Mrs. Smeaton-Sampson, June 1955