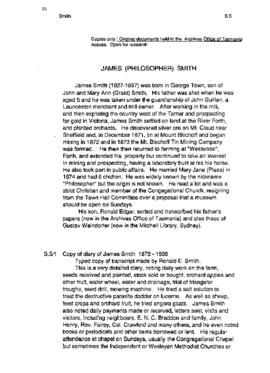 James Smith (1827-1897) was born in George Town, son of John and Mary Ann (Grant) Smith. His father was shot when he was aged 5 and he was taken under the guardianship of John Guillan, a Launceston merchant and mill owner. After working in the mill, and then exploring the country west of the Tamar and prospecting for gold in Victoria, James Smith settled on land at the River Forth, and planted orchards. He discovered silver ore on Mt. Claud near Sheffield and, in December 1871, tin at Mount Bischoff and began mining in 1872 and in 1873 the Mt. Bischoff Tin Mining Company was formed. He then then returned to farming at "Westwood", Forth, and extended his property but continued to take an interest in mining and prospecting, having a laboratory built at his his home. He also took part in public affairs. He married Mary Jane (Pleas) in 1874 and had 6 chidren. He was widely known by the nickname "Philosopher" but the origin is not known. He read a lot and was a strict Christian and member of the Congregational Church, resigning from the Town Hall Committee over a proposal that a museum should be open on Sundays. For more information see http://adb.anu.edu.au/biography/smith-james-philosopher-4605

Some original documents (diary & letters) held in the Archives Office of Tasmania.

Collection consists of copies of a diary, letters and official documents relating to James Smith.

Original material held at the Tasmanian Archives and Heritage Office