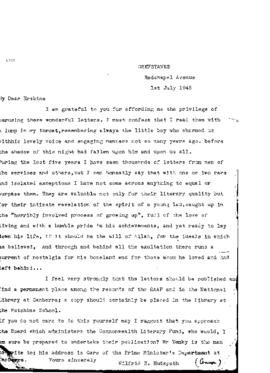 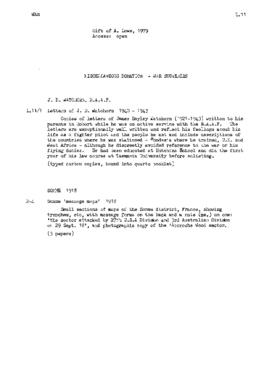 James Bayly Watchorn (3 March 1921 - 4 October 1943) was the second and youngest son of Erskine Clarence Watchorn and Mary Wylly Bayly. He was educated at the Hutchins School, and began his law course at the Tasmanian University. He enlisted in the RAAF in December 1940 and trained in Southern Rhodesia. He completed his training in England, and
was stationed in West Africa for 12 months, before being posted back to England. He was killed whilst testing Typhoon fighters in England in 1943.
See: https://www.awm.gov.au/collection/R1718110/

Collection consists of copies of letters of James Bayley Watchorn (1921-1943) written to his parents in Hobart while he was on active service with the R.A.A.F. The letters are exceptionally well written and reflect his feelings about his life as a fighter pilot and the people he met and include descriptions of the countries where he was stationed - Rhodesia where he trained, U.K. and West Africa - although he discreetly avoided reference to the war or his flying duties. He had been educated at Hutchins School and did the first year of his law course at Tasmania University before enlisting.
War souveniers, Somme 'message maps' 1918
Small sections of maps of the Somme district, France, showing trenches, etc, with message forms on the back and a note (ms.) on one: 'the sector attacked by 27th U.S.A Division and 3rd Australian Divisionn on 29 Sept. 18', and photographic copy of the Accroche Wood sector.