Collection consists of one folio leather bound minute book and other material relating to the Chamber of Commerce including annual reports and handbooks and directories.

Photocopies of thirty letters written by Edward Nicholas Coventry Braddon and published serially in The Statesman & Friend of India, May to October 1878, describing life in Tasmania. entitled "A home in the colonies" also THRA articl... 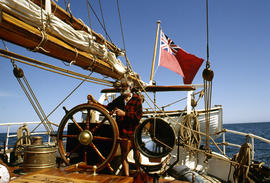 The collection features photographs taken by Hobart photographic studio Beattie’s Studio, also known as J.W. Beattie, for the Electrolytic Zinc Co. at the company’s Risdon smelter between 1920 and 1940. The collection depicts construction of new ...

Collection consists of material in relation to the business of general merchant, importer of wines, spirits, cigars and other delicacies set up by William Johnstone and following his death managed by his son Willian John Johnstone and Stuart Ear...

The copies of the diaries are dated between 1889 and 1926 and contain brief entries for each day. They relate to both personal and farm activities and appear to relate to a comparatively small general farm.For example: "stayed at house and ma...

Letters from Walworth Baguley, Smithton written 12/8/1914 and 20/5/1915. Two photocopies of original letters, signed W. Baguley, written from Smithton and Irishtown, addressed to 'Wilkie'. He describes attempts to establish a settlement ...

Letter written by Frederick K. Astell a miner from Zeehan to his uncle, referring to a downfall in the share market, friends and family, the Waratah to Zeehan railway would be a boon to the coast if constructed, house on Argent Tram property, chan...

Diploma of degree of Associate of Arts awarded to Henry Lewis Garrett of Hobart Town, who passed in English, Latin(with credit and prize) Greek, French (with credit) and pure mathematics and was placed in the second class Signed by H. Officer, pre...

Xeroxed copy of Robert Doctors account book for the years 1827 to 1851 with details of goods and services supplied by and to various residents in the Sorell area, including: boots, shoes soled and heeled, plough mould, beans, handle, tobacco, rum...

Microfilm includes- Diary of Adam Amos (1774-1845), May 1822 - December 1825. A record of chief happenings in the district of Great Swan Port of which Adom Amos was Chief District Constable, including notes of musters and convict passes, with name...

This collection is a sample of images of Queenstown, Zeehan and Macquarie Harbour, sourced from the Colin Dennison image collection. Most of the images were originally created prior to 1956 and have been sourced from private Tasmanian collections....