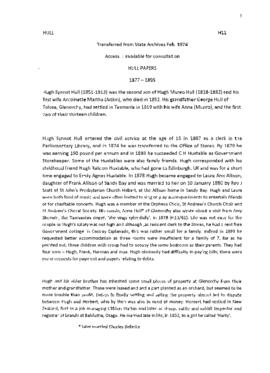 Hugh Synnot Hull (1851-1913) was the second son of Hugh Munro Hull (1818-1882) and his first wife Antoinette Martha (Aitkin), who died in 1852. His grandfather George Hull of Tolosa, Glenorchy, had settled in Tasmania in 1819 with his wife Anna (Munro), and the first two of their thirteen children.
Hugh Synnot Hull entered the civil service at the age of 15 in 1867 as a clerk in the Parliamentary Library, and in 1874 he was transferred to the Office of Stores. By 1879 he was earning 150 pound per annum and in 1893 he succeeded C H Huxtable as Government Storekeeper. Some of the Huxtables were also family friends. Hugh corresponded with his childhood friend Hugh Ralston Huxtable, who had gone to Edinburgh, UK and was for a short time engaged to Emily Agnes Huxtable. In 1878 Hugh became engaged to Laura Ann Allison, daughter of Frank Allison of Sandy Bay and was married to her on 10 January 1880 by Rev J Scott of St John's Presbyterian Church Hobart, at the Allison home in Sandy Bay. Hugh and Laura were both fond of music and were often invited to sing or play accompaniments to entertain friends or for charitable concerts. Hugh was a member of the Orpheus Choir, St Andrew's Church Choir and St Andrew's Choral Society. His cousin, Anna Hull of Glenorchy also wrote about a visit from Amy Sherwin, the Tasmanian singer, 'she sings splendidly', in 1878 (H11/61). Life was not easy for the couple as Hugh's salary was not high and although, as resident clerk to the Stores, he had a rent-free Government cottage in Castray Esplanade, this was rather small for a family. Indeed in 1893 he requested better accommodation as three rooms were insufficient for a family of 7, for as he pointed out, three children with croup had to occupy the same bedroom as their parents. They had four sons - Hugh, Frank, Herman and Max. Hugh obviously had difficulty in paying bills; there were many requests for payment and papers relating to debts. Hugh and his elder brother had inherited some small pieces of property at Glenorchy from their mother and grandfather. These were leased and had part planted as an orchard, but seemed to be more trouble than profit. Delays in finally settling and selling the property almost led to dispute between Hugh and Herbert, who by then was also in need of money. Herbert had settled in New Zealand, first in a job managing Clifden Station and later as sheep, cattle and rabbit inspector and registrar of brands at Balclutha, Otago. He married late in life, in 1892, to a girl he called 'Harty'. later married Charles Bellette Their first child was lost at birth but a boy was born later. As well as his eldest brother Herbert, Hugh had half brothers by his father's second marriage to Margaret Bassett Tremlett and also many cousins as his grandfather George, has 13 children : Georgina Rose (married P Emmett); Hugh Munro (married [1] A M Aitkin [2] M B Tremlett); Frederick George (married Sophia Turrell); Robert Edward (died 1841); Jane Harriet (married F A Downing; George Thomas William (married Miss Roberts); Temple Pearson Barnes; Henry Joscelyn (died 1893, married Mary Jane Wilkinson); Anna Munro (married T H Power); James Douglas (married Eliza Clothier); John Franklin Octavius (died 1874, married Mary Ann Lester); Alfred Arthur (married? Barnes); Mary Emily (married W M Davidson).