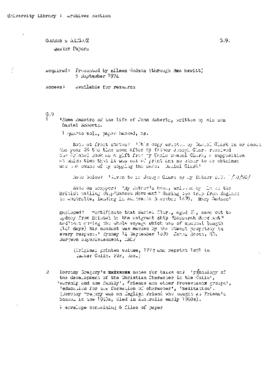 One folder and one boxed memoir

John Roberts was a Quaker humourist, born about 1623 at Siddington, near Cirencester. His parents were John, a yeoman, and Mary Roberts. Roberts joined the parliamentary forces and remained with them until 1645. He inherited the family property in Siddington, settled there and married in 1646 Lydia. They had six children together, including their youngest son, Daniel Robert (1658-1727).
John Roberts was a devout man. In 1655 he visited the Quaker Richard Farnworth, who led Roberts to embrace Quaker doctrine. As a Quaker Roberts suffered persecution and was imprisoned multiple times. He was imprisoned in Gloucester Castle in 1657 for defending fellow Quakers and he was twice imprisoned for not paying tithes.
Roberts died in February 1684.
For more information see https://en.wikisource.org/wiki/Roberts,_John_(1623%3F-1684)_(DNB00)

Dorothy Gregory was an English Friend who taught at Friend's School in the 1940's, died in Australian early 1960s