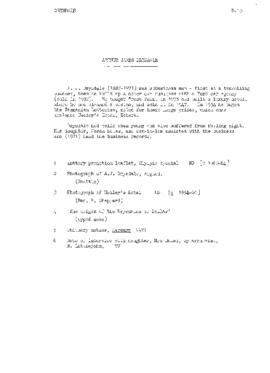 A. J. Drysdale (1887-1971) was a business man - first as a traveling butcher, then he built up a motor car business with a Ford car agency which he sold in 1932. He bought Wrest Point in 1935 and built a luxury hotel, where he had planned a casino, and sold it in 1947. In 1954 he began the Tasmanian Lotteries, noted for their large prizes, which once included Hadley's Hotel, Hobart. Drysdale had polio when young and also suffered from failing sight. His daughter, Norah Bates, and son-in-law assisted with the business and (1971) held the business records.
More information see: http://adb.anu.edu.au/biography/drysdale-arthur-james-10055

Material relating to the Tasmanian lottery, the origins of the Drysdales of Dollar and note of interview with Drysdale's daughter