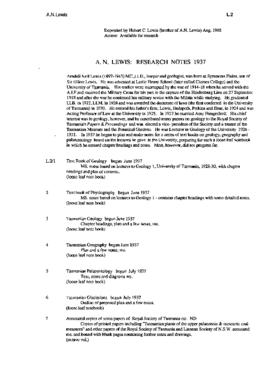 Arndell Neil Lewis (1897-1943) MC.,LLD., lawyer and geologist, was born at Symmons Plains, son of Sir Elliott Lewis. He was educated at Leslie House School (later called Clemes College) and the University of Tasmania. His studies were interrupted by the war of 1914-18 when he served with the A.LP and received the Military Cross for his part in the capture of the Hindenburg Line on 27 September 1918 and after the war he continued his military sevice with the Militia while studying. He graduated LLB. in 1922, LLM. in 1924 and was awarded the doctorate of laws (the first conferred in the University of Tasmania) in 1930. He entered his father's firm, Lewis, Hudspeth, Perkins and Dear, in 1924 and was Acting Professor of Law at the University in 1925. In 1927 he married Amy Hungerford; His chief interest was in geology, however, and he contributed many papers on geology to the Royal Society of Tasmania's Papers & Proceedings and was elected a vice-president of the Society and a trustee of the Tasmanian Museum and the Botanical Gardens. He was Lecturer in Geology of the University 1926-1931. For more information see http://adb.anu.edu.au/biography/lewis-arndell-neil-7182

Collection consists of notes for a series of text books on geology, geography and palaeontology based on the lectures A.L. Lewis gave at the University. He prepared for each a loose leaf notebook in which he entered chapter headings and notes. Most, however, did not progress far.