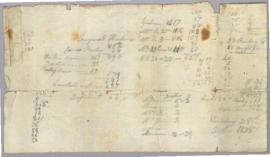 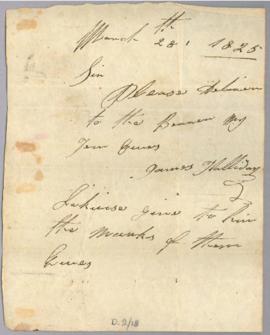 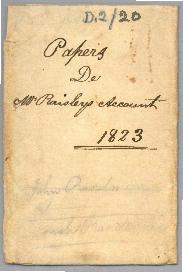 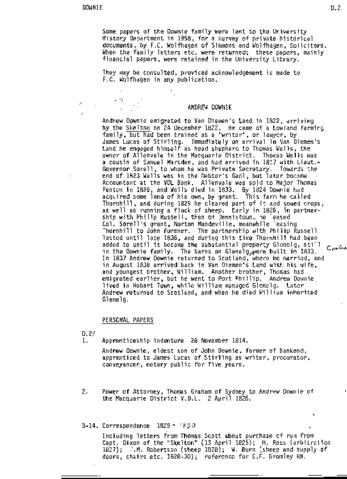 Andrew Downie emigrated to Van Diemen's Land in 1822, arriving by the Skelton on 24 December 1822. He came of a Lowland farming family, but had been trained as a 'writer', or lawyer, by James Lucas of Stirling. Immediately on arrival in Van Diemen's Land he engaged himself as head shepherd to Thomas Wells, the owner of Allenvale in the Macquarie District. Thomas Wells was a cousin of Samuel Marsden, and had arrived in 1817 with Lieut.¬ Governor Sorell, to whom he was Private Secretary. Towards the end of 1823 Wells was in the Debtor's Gaol, but later became Accountant at the VDL Bank. Allenvale was sold to Major Thomas Fenton in 1820, and Wells died in 1833. By 1824 Downie had acquired some land of his own, by grant. This farm he called Thornhill, and during 1825 he cleared part of it and sowed crops, as well as running a flock of sheep. Early in 1826, in partner¬ship with Philip Russell, then of Dennistoun, he leased Col. Sorell's grant, Norton Mandeville, meanwhile leasing Thornhill to John Furener. The partnership with Philip Russell lasted until late 1836, and during this time Thornhill had been added to until it became the substantial property Glenelg at Gretna. The barns on Glenelg where built in 1833. In 1837 Andrew Downie returned to Scotland, where he married, and in August 1838 arrived back in Van Diemen's Land with his wife, and youngest brother, William. Another brother, Thomas had emigrated earlier, but he went to Port Phillip. Andrew Downie lived in Hobart Town, while William managed Glenelg. Later Andrew returned to Scotland, and when he died William inherited Glenelg.
The 1000 acres farming property, Glenelg at Gretna, was granted to Downie in 1824 by Governor Sorell and established the first merino flock. The property still in the Downie family today and still farming ultra fine merino fleece.

Some papers of the Downie family were lent to the University History Department in 1958, for a survey of private historical documents, by F.C. Wolfhagen of Simmons and Wolfhagen, Solicitors. When the family letters etc. were returned; these papers, mainly financial papers, were retained in the University Library.

May be consulted, provided acknowledgement is made to F.C. Wolfhagen in any publication.

Original inventory and descriptive notes can be found at https://eprints.utas.edu.au/10910/2/Downie.pdf