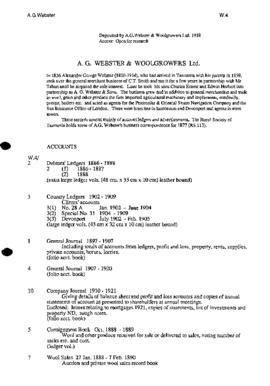 Alexander George Webster (1830-1914), merchant, was born on 3 December 1830 in London. He spent two years at Cape of Good Hope with his mother and sister before they sailed to Sydney in the Roxburgh Castle; they arrived in Van Diemen's Land in 1840. Educated at the Melville Street school in Hobart Town and at a private boarding-school at Kempton, he was also a pupil of the artist Thomas Evans Chapman. Later, as an amateur he exhibited both water-colours and pencil drawings of the Tasmanian landscape.
At 14 Webster began work with Thomas Lowes, the Hobart auctioneer. He moved to Degraves Bros, who then combined sawmilling with the proprietorship of the Cascade Brewery, and in 1850 he joined the wool and grain store of C. T. Smith, his uncle. After Smith retired in 1856 Webster ran the business in partnership with his relation John Tabart, trading as Tabart and Webster. In 1879 after the retirement of Tabart Webster took his son Charles, into the business, which in 1888 became A.G. Webster & Son. The firm handled most of the Tasmanian wool business and Imported agricultural implements. The company was incorporated In 1910 and two other sons, Edwin and Arthur became dlrectors.
Webster was elected a fellow of the Royal Society of Tasmania in 1865 and a member of its council in 1871; in 1905, as chairman, he read an address of welcome to the new governor Sir Gerald Strickland. He was also a justice of the peace, chairman of directors of the Tasmanian Steam Navigation Co. and the South British Fire and Marine Insurance Co. of New Zealand, and chairman of the Perpetual Trustees Co. State trustee of the Tasmanian Museum and Botanical Gardens, Webster was also a master warden of the Marine Board, Hobart, and American consul in 1877-1907. He was a commissioner of fisheries; as chairman in 1903 he visited the Baird Hatchery in California, from where he successfully supervised the dispatch to Tasmania of some 500,000 Quinnat salmon ova.
He married Louisa Harriett Turnley at St David's Anglican Cathedral, Hobart, on 30 November 1859 they had eight children.

In 1856 Alexander George Webster (1830-1914), who had arrived in Tasmania with his parents in 1839, took over the general merchant business of C.T. Smith and ran it for a few years in partnership with Mr Tabart until he aquired the sole interest. Later he took his sons Charles Ernest and Edwin Herbert into partnership as A.G. Webster & Sons. The business grew and in addition to general merchandise and trade in wool, grain and other produce the firm imported agricultural machinery and implements, windmills, pumps, boilers etc. and acted as agents for the Peninsular & Oriental Steam Navigation Company and the Sun Insurance Office of London. There were branches in Launceston and Devonport and agents in most towns.

Collection consists of account ledgers and advertisements for A.G. Webster