Proposed voyage to Van Diemen's Land in ship 'Hope' June 1821 - January 1822. Papers relating to the proposal of some members of the Wesleyan Methodist Society to proceed to V.D.L . and the decision at meetings of 29 June, 2 July, finalised on 4 July, to travel in the ship 'Hope' owned by Messrs Degraves and Macintosh, Captain Francis Allison. However the ship was held up by HM Customs at Ramsgate, being both unseaworthy and overloaded, and the owners failed to provide the provisions and accommodation promised. The Government eventually chartered another ship, 'Heroine', to continue the voyage.

Report on arrival and prospects

Notes from letters from Ann and Robert Mather from Van Diemen's Land. Report on arrival and prospects dated January 1824.

Undated appeal for books from the Christian Knowledge Society.

Ann Mather's letters home Jan 1824 -1829. Extracts and copies of letters from Mrs Ann Mather (nee Benson) to her brother, Rev. Samuel Benson, and sisters, Isabella Whytall and Sarah Benson in London, apparently made after her death, consisting mainly of religious sentiments. Also copy of her Memoir written by her brother Rev. Samuel Benson(18b)

Robert Mather's letter to his brother-in-law 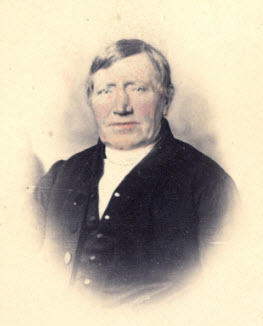 Papers relating to the voyage out and settlement of Robert Mather and his wife, Ann (Benson). Many of the papers (Ml0/16-20) consist of extracts from letters from Ann Mather to her brother, Rev. Samuel Benson, and sisters Isabella Whytall and Sarah Benson (m. Hammond 1832), in UK and were probably given to their niece, Sarah Benson Mather who married George Washington Walker in 1840, after Ann Mather's death in 1831. 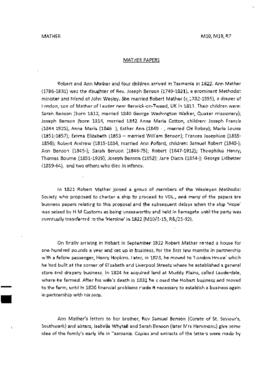 Miscellaneous information about the Mather Family