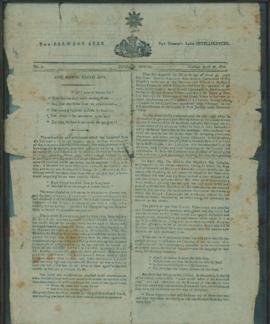 The Derwent Star and Van Diemen's Land Intelligence, Hobarts first and short lived newspaper was first issued on 8 January 1810. This issue No. 7, 3 April 1810 gives an account of the recent death and funeral of David Collins, Lieutenant Governor of Van Diemen's Land. Produced fortnightly by the government printer George Clark/Clarke, there were twelves issues published from 1810 to 1812.