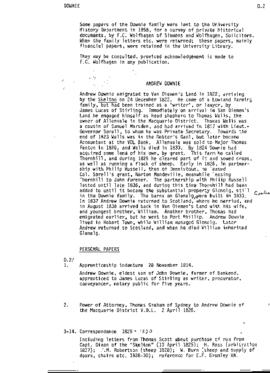 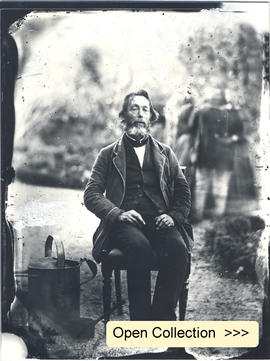 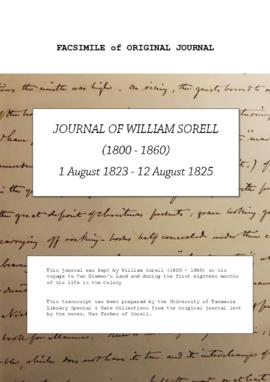 Collection consists of type written transcript of original diary of William Sorell Jnr. for the years 1823-1825.
In his journal Sorell made brief daily entries of his voyage out, his reception at Government House, the arrival of Lt. Governor Arthur, his new post as Registrar of the Supreme Court. The entries are brief but of particular interest are his references to the arrival of ships and his meeting officers and other people of note landing at Hobart. He makes occasional references to his work and cases in court and to Judge Pedder and his wife. Apart from his work Sorell's chief activities, as noted, were riding, walking, reading and dining with 'friends and officers of the Barracks and Convict Department. He attended church regularly on Sunday and mentions the arrival of an organ subscribed for by the in habitants (13, 14 April 1825). He took occasional shooting trips, mainly to the Coal River (Richmond). Most of the entries are, however, brief and lacking in detail or descriptive accounts as may be illustrated by his reference to a proposal to transfer the capital to Brighton: 'Meeting at Government House. Removal to Brighton in a large Meeting. I attended. I think the Lt. Governor has made up his mind upon the removal.' (19 May 1825)
Transcript of original diary of William Sorell Jnr. made by L. Rodda and P.S. King. ( 83 pages) Photocopy only now held. Also a typed name index to diary to diary - on catalogue cards made by L. Rodda. 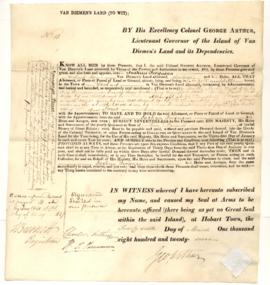 Grant of land at 31 Campbell Street, Hobart to Joshua Fergusson

Grant of land at 31 Campbell Street, Hobart to Joshua Fergusson made by his Excellency Colonel George Arthur Lieutenant Governor of Van Diemen's Land on the 26th day of March 1827. Subject to the payment of a yearly quit-rent of two pounds payable on the 31st day of January each year.
31 Campbell Street is the site of the University of Tasmania's major creative industries and performing arts development, 'The Hedberg', adjoining Hobart's historic Theatre Royal on the 'Wapping 4' site. The University of Tasmania opened at the Hedberg in Semester 1, 2020 after almost 10 years in conception, consultation, planning and construction stages. The project was led by Tasmanian firm Liminal Architecture and designed in collaboration with WOHA and Arup.
The significance of the Hedberg site in the heart of Wapping dates to the 1830s, when it was a lively convergence of working-class homes, industry and entertainment. Archaeological work was undertaken in consultation with the Tasmanian Heritage Council, and results from the archaeological investigation informed aspects of the design.
The heritage-listed facade of the Hedberg Brothers Garage on Collins Street is the University of Tasmania entrance at the Hedberg. Built in 1925, it has intrinsic heritage value as an early, unusual and important example of its type. 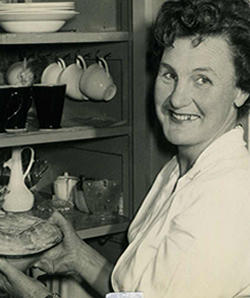