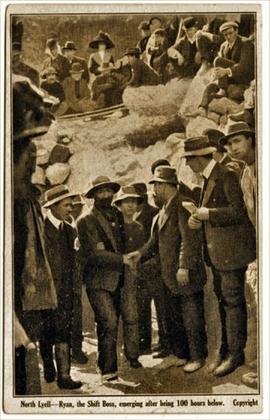 North Lyell - Ryan, the Shift Boss, emerging after being 100 hours below

Image contains text identifying the subject and also 'copyright'.Originally taken from a postcard published in the weeks following the 1912 North Mount Lyell mine disaster. Image shows people greeting Ryan as he moves towards the photographer, possibly with the mine entrance at the rear.