Draft letter dated 14 October 1835 to Lieut-Governor concerning Gordon's servants: Charles Hardiman, shepherd, was expecting a ticket of leave but had been suspected of stealing hams, John McQuaide, shoemaker and another former servant, William Mitchell, who had been swindled - a case of extreme hardship.

Draft of letter to "Winston"

Executors' accounts for the estate of William Gunn deceased . Dated 1868 -1877. Papers of the trustees and executors under the will of William Gunn (R.C. Gunn and Thompson and Ritchie), including authority to lease Glen Dhu to Mrs Gunn for one year, accounts for fencing and repairs at Glen Dhu, insurance, solicitors' fees, rent, rent for Bourbon, rent for Lakeland, share of income for Mrs Gunn, Mrs Allison, William Gunn jr., Isabella Simmons, E.E. Burrows, James A. Gunn and division of estate between Louisa Gunn, Elizabeth E. Gunn, William Gunn, Mrs Allison and James Gunn.

Request from the Survey Office to John Halls to measure 100 acres in Forcett, subject to a reserve to the Government of 100 acres at the Ferry. Also covering letter from W. Gunn to Gordon - the last clause spoils all (transcript only)

Notice that in consequence of a domestic affliction in the family of the Governor [Sir Henry E. Fox Young] the Levee and Ball for the 24th 1855 would not take place.

Miscellaneous correspondence of the Gunn Family - Letters, drafts of letters, portions of letters and a poem. 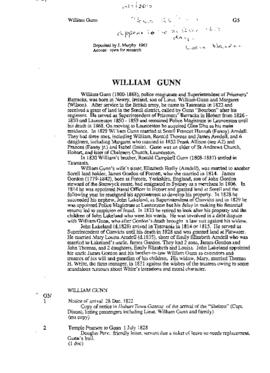 Various letters, 1 memorandum of appointment, Executor papers and letters concerning the marriage of the widow of John Lakeland to T.H. White, transcripts of letters and draft of letter.

Letter to James Gordon arbitrator in civil case, Sydney Order of Civil Court of N.S.W. for dispute between William Stewart and Robert Campbell to be referred to the arbitration of James Gordon (11 October 1810); accounts of "estimated proportion arising to Captain Stewart on the sale of seal skins, oil" etc.; valuation of sloop "George", brig Venus, etc.

Letter from James Gordon to nephew John [? John Thomas Lakeland] dated 14 October 1835. Box of apples, jams etc sent, reference to his studies, stock prices, crops, bees, prosecution of the shepherd and the groom for their infamous conduct, respects to Mr Manning and love to James. (transcript only, original too damaged and powdery to handle)

Letter from Robert Campbell Gunn to brother William dated 6 October 1828 from Barbados regarding the want of cash for fare home in spite of economies, appointment as clerk to Royal Engineers Antigua uncertain, thinking of moving to V.D.L., Gunn's father and father-in-law recently died in Antigua

Letter written 1 July 1828 from Temple Pearson, Douglas Park to Gunn: friendly letter regarding servant due a ticket of leave so needs replacement and Gunn's bull.

Letter from Thomas & Sarah Cherry to son James Cherry. Not heard from him. Addressed to George Thompson, River Plenty, with postscript asking if James Cherry "be no more" Mr Thompson requested to inform his parents.

Letter from T.W. Birch, Hobart, to James Gordon at Sydney dated 8 February 1811. Stock well, some in calf, bull, a passenger in the "Cambell Macquarie" an inmate of Birch's house had seen them all and could inform J.G.'s brother in law, skins, land.

Letter and invoice : George A. Lloyd

Letter and invoice from George A. Lloyd, Sydney: sending 97 bags of maize to sell on his account, proceeds to be invested in potatoes or wheat (8 August 1840); bill of lading for 80 bags of potatoes to Sydney per Eamont for G. A. Lloyd (8 September 1840)

Letter from Frank [?Allison] to Harry dated 13 June 1887. From Woodlands: the little mare.

Letter regarding Robert Simpson dated 1846. Inquiry from Glasgow solicitors to Gunn about a Robert Simpson who was convicted of theft in Glasgow in 1823 and transported, convicted again in 1840, but not heard of since, was next of kin to an uncle recently deceased.

Letter from Rev. Robert Auld, Orkney, dated 8 April. 1845. Inquiring about Joseph Welsh and a bill of exchange he sent to Gunn in 1843 for Welsh. (transcript only, original too fragile and powdery too handle)

Letter from Ronald T. Gunn to sister Louisa dated 22 June 1869. Unwilling to contribute to Glen Dhu as he had his own rooms in the store in town.

Memorandum about William Pickin and queries about evidence relating to his offence.

Copy of notice that appeared in the Hobart Town Gazette of the arrival of the "Shelton" (Capt. Dixon), listing passengers including Lieut. William Gunn and family. (ms copy) dated 28 December 1822

Photographs of the Military hospital & convalescent camp, Cairo May 1915 published by the Commonwealth Gazette.

Poem : "Count not the hours"

Poem: "Forget me not"

Rough draft of conveyance of property.

Trustees of Lakeland - Mrs Lakeland's remarriage November 1830 - June 1831. Mrs Mary Lakeland, widow of John Lakeland, and her marriage to Thomas H. White (employed as manager of their Forcett farm 1830-31): papers of James Gordon and William Gunn, executors and trustees under the will of John Lakeland (d. 17 March 1829), relating to the proposed marriage which was opposed by Gordon and by Mrs Lakeland's sister, Elizabeth Gordon, because of doubts as to White's intentions and unsavory rumors about his morals. Papers include: correspondence between Mary Lakeland, James Gordon, William Gunn and Thomas White; copy of statement by William Gunn and M. Lakeland that Mrs Lakeland and Mr White had formed a mutual attachment but before she proceeded further it was her intention that inquiry would be made into Mr White character and the property devised by her late husband would be settled so that Mr White could have no control over it (7 January 1831, transcript only, original document too fragile too handle); counsel's opinion on Lakeland's will (19 February 1831); draft letter complaining that White had left the farm in working hours and ridden a young horse too far (30 Jan.1831); Thomas White's resignation from James Gordon's service on the Lakeland's Pittwater farm, Studley Park (14 Feb. 1831); information laid before a J.P. that White had absented himself from his employment for 4 days (8 Feb. 1831, transcript only, original too decayed to handle); summons for Thomas White for absconding from J.G.'s service (17 Feb. 1831); letter from W. Gunn to Gordon: Mrs Lakeland had wanted some papers from her box but he refused them, Fanny had told him that "the ring is purchased, an 8lb wedding cake ordered and the ceremony is to be performed on Thursday the 25th instant" (15 Feb. 1831, transcript only, original too decayed to handle); letters from Joseph Steele (5 Jan. 1831), anonymous writer suggesting that Thomas White had a wife living in Scotland (ND), J. Laing (26 Jan. 1831); list of household furniture at Studley Park, Pittwater, left by Mrs White on 4 Feb. signed T. White (6 June 1831); letter from Thomas White to James Gordon on the health of child Louisa Lakeland - recovered from fever (13 June 1831).

Letters, and transcripts of letters to William Gunn, copy of notice in newspaper, Account ledger, Bank book, Executor accounts for the estate of William Gunn