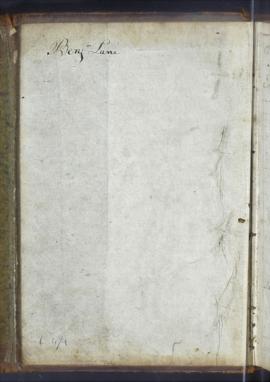 The volume was prepared while Lane was a prisoner of war of the French and apparently occupied himself in studying and teaching other prisoners. It contains French grammar (noted as completed 7 March 1812), exercises on Mr. Porney's grammar (noted as completed 29 February 1812), mathematical examples and problems, stocks and shares, chronology, navigational problems (with diagram and tables), book keeping with examples of business 'waste book', 'balancing journal' and ledger entries for 1807 and 1812-13 based on supposed voyages and trade dealings.
At the back of the volume is a rough pencil sketch of the 'privateer that chased Captain Lane'. Also entered on blank pages at the end of the volume is a copy of notes concerning Captain Benjamin Lane sent by James Arthur Lane to his daughter Mrs D.A. Lane, 20 June 1945 and notes by Lt. Col. D.A. Lane (descendent of James Christmas Lane, younger brother of Benjamin), 18 November 1945.

Copy of notes on Benjamin Lane

Copy of notes on Benjamin Lane 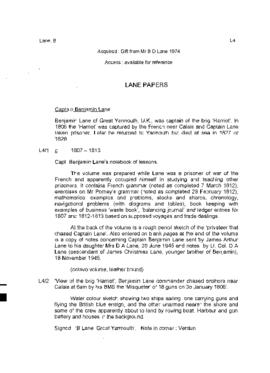 Collection consists of leather bound octavo note book prepared while Lane was a prisoner of war of the French also a watercolour sketch of the brig Harriot and some notes on Lane. 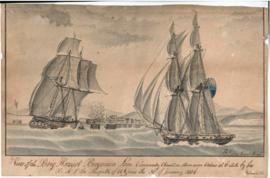 View of the brig 'Harriot'

View of the brig 'Harriot', Benjamin Lane commander chased onshore near Calais at 6am by his BMS the 'Misqueter' of 18 guns on 30 January 1806. Water colour sketch showing two ships sailing; one carrying guns and flying the British blue ensign, and the other unarmed nearer the shore and some of the crew apparently about to land by rowing boat. Harbour and gun battery and houses in the background. Signed 'B. Lane, Great Yarmouth'. Note in corner: Verdun.