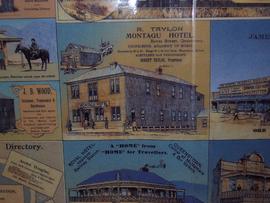 Image is only one of a number of businesses on a colour advertising sheet. Others shown include Royal Hotel and JB Wood, hairdresser. 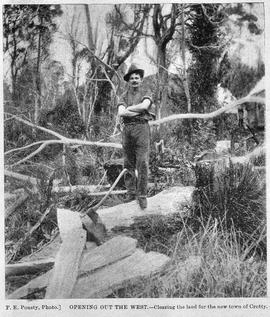 View of male axeman standing on fallen timber in the bush, Crotty, Tasmania.

Image likely sourced from a newspaper or publication as it contains printed legend at the bottom: Opening out of the west - clearing the land for the new town of Crotty. Photographer identified. Primitive buildings just visible in the background. It is likely the image is older than 1902.